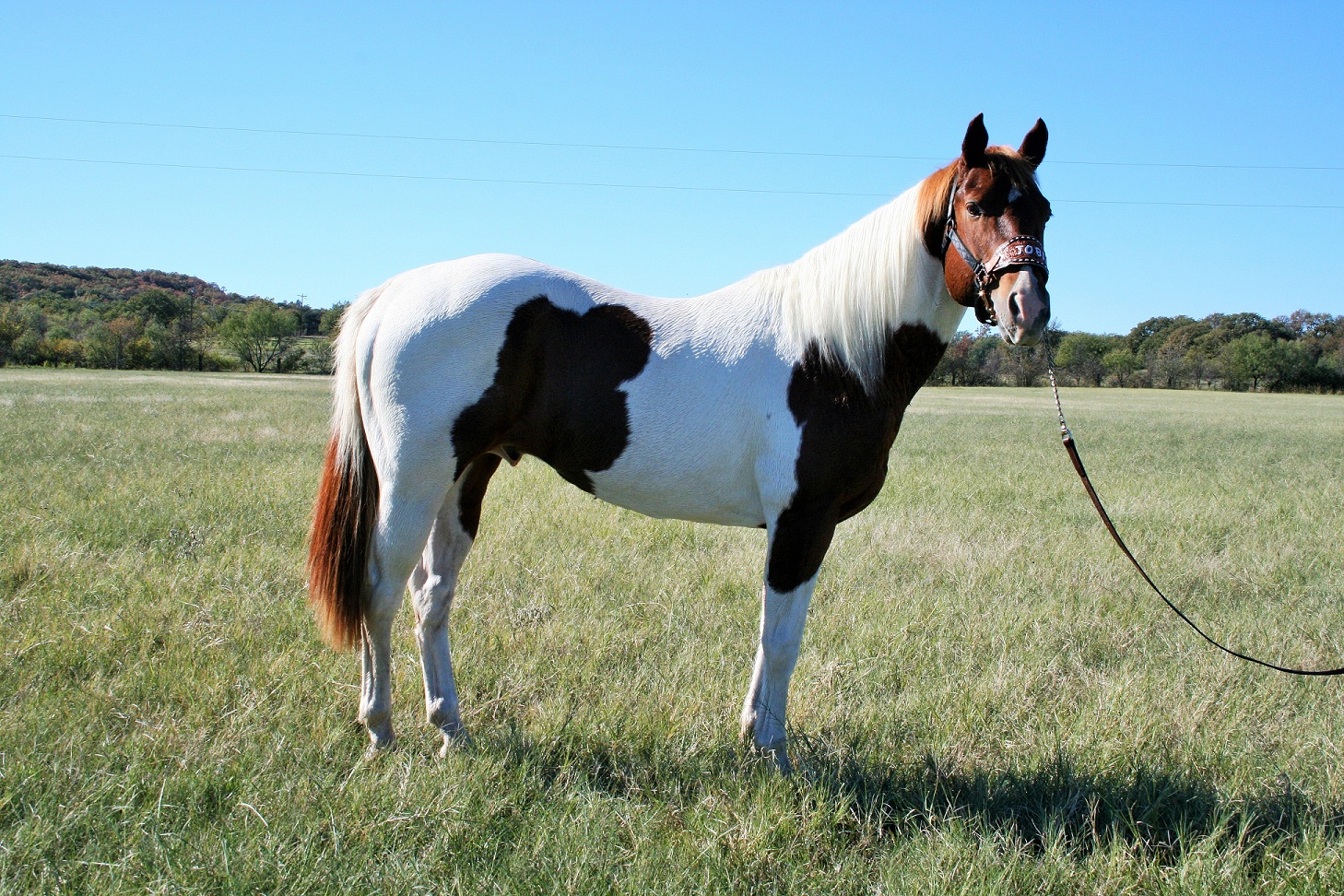 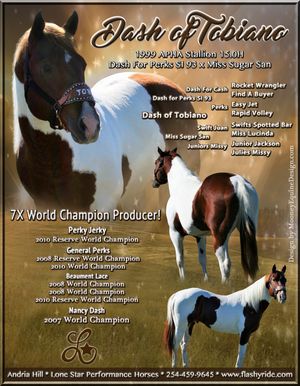 Sire: Dash of Tobiano was sired by the immortal Dash For Perks SI 93.  Dash for Perks has lifetime AQHA race earnings of of $25,814, is an AQHA Race ROM Earner, and has a SI of 93 (AAA). He is the sire of AQHA Race Offspring with earnings of over $1,600,000. He is a leading Equi-Stat barrel racing sire with offspring earnings in excess of $1,800,000. He is currently the #4 All Time Leading Barrel Sire and the #5 All Time Leading Broodmare Sire. He is also the only Leading Barrel Sire with a son also on the Leading Sires List. He is the sire of 2012 National Finals Rodeo World Champion barrel horse, Perkulatin as well as the sire of Miss Perky Bug who set the arena record on a standard pattern last year.


Dam: Miss Sugar San was a very nice APHA mare that was owned by the Stanley's and crossed extremely well with Dash for Perks. She was a talented roping horse and a tough 1D and multiple rodeo horse producer.  According to hearsay, she was the Stanley’s favorite rope horse on the ranch.  For this reason, the Stanleys crossed her with Dash for Perks 7 times.  The resulting offspring from this cross have resulted in the most proven APHA paint sons and daughters of Dash for Perks.   Dash of Tobiano was the first prince of this amazing cross.  Here are some of his younger siblings:
2002 - COCO PERKS, Black tobiano gelding
2003 - MISS SUGAR PERKS, Black tobiano mare who was a very nice 1D rodeo mare and now has been retired to the broodmare band.  Sugar will be bred to Dash Ta Magnolia beginning in 2015.
2004 - MAGGIE PERKS, Bay solid mare
2006 - PERKS PICASSO, Black tobiano mare who ran barrels competitively before becoming a sought after broodmare
2007 - ADD A DASH OF SUGAR, Bay solid mare who runs barrels in tough TX competition
2008 - DB PERKS, Sorrel tobiano gelding 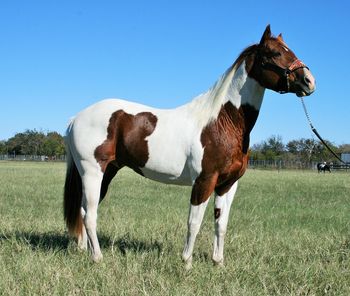 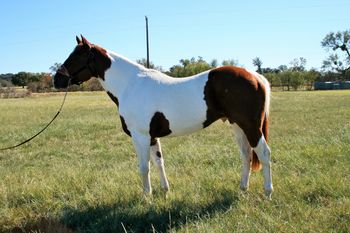 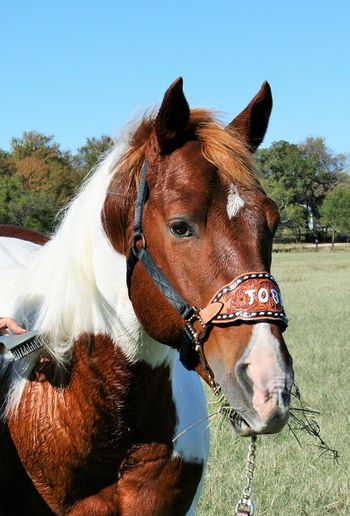 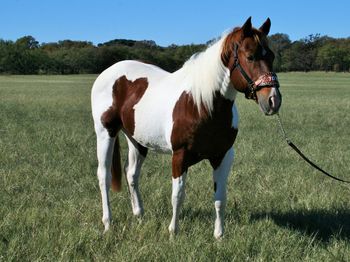 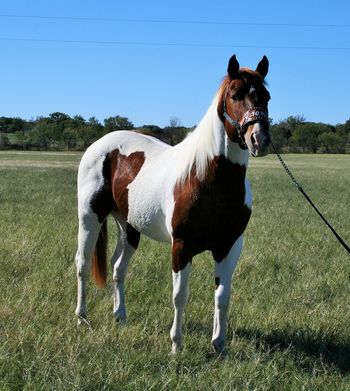 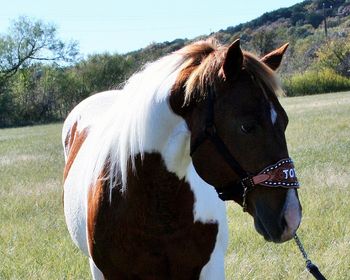 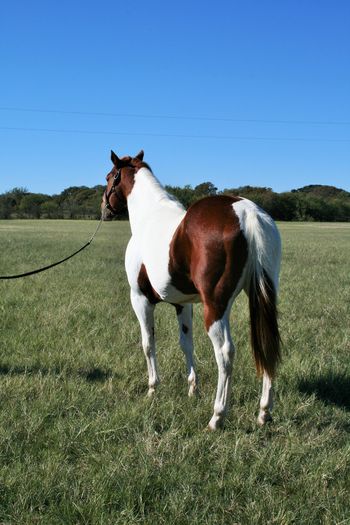 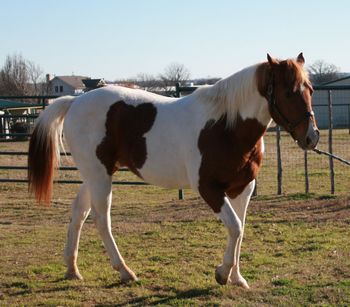 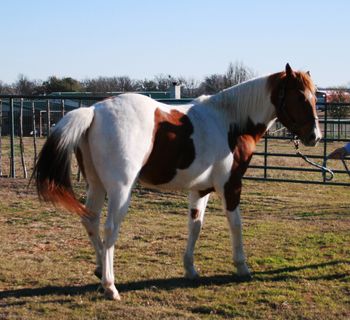 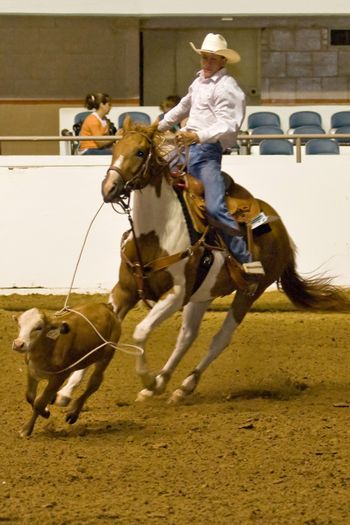 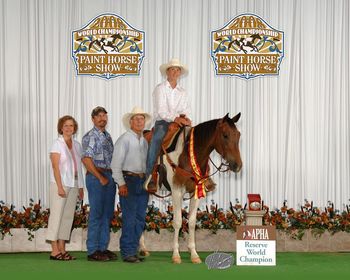 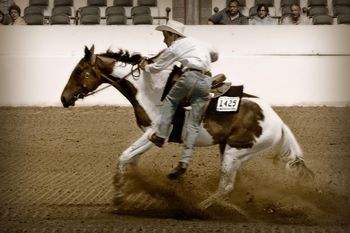 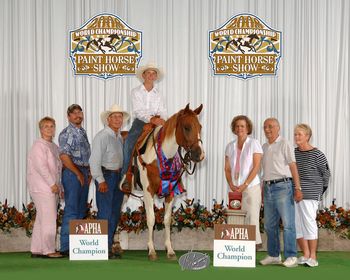 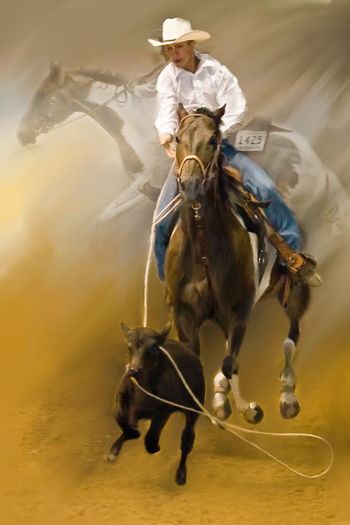 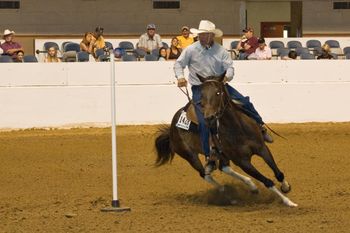 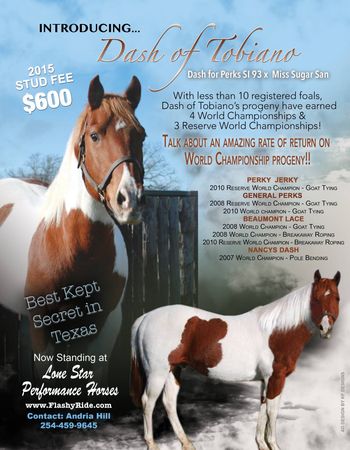